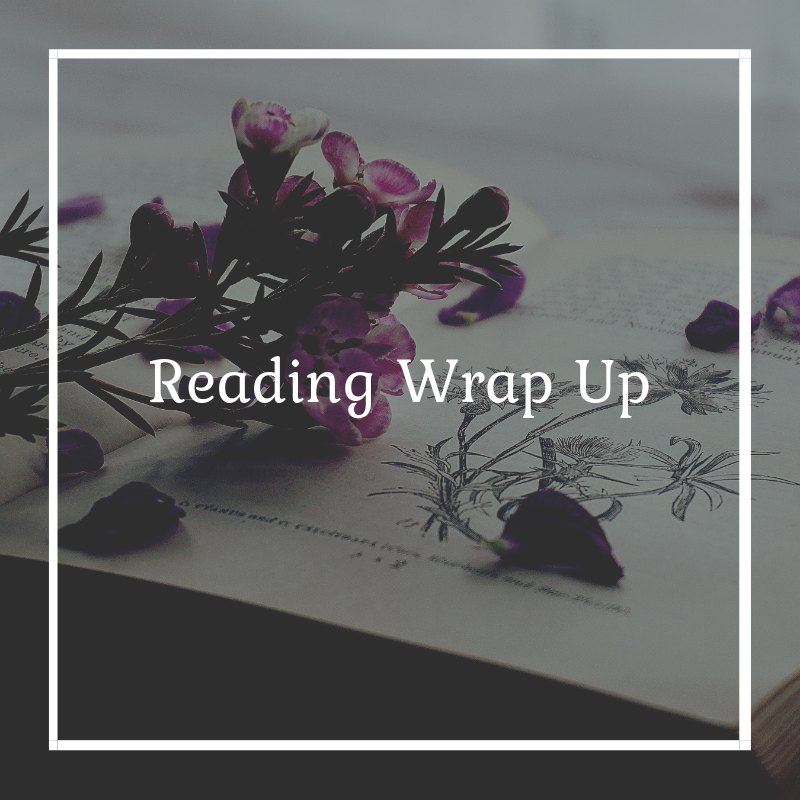 “There is a pirate in the basement.”

First line in The Starless Sea by Erin Morgenstern

Hi, guys. January is over so here you get the wrap up of the reading I did this past month. January always feels like the longest month of year to me. I’ve been telling myself that we’re close to February since the 7th. However, I did read some amazing books this month so that sort of made up for it. In fact, I’m 99% sure I’ve already read my favorite book of the year. I hope something even better comes along of course but a high bar has been set already in January. The other 4 books I read this month were also good as my lowest rating was 3 stars.
Before we get into the mini-review part, I just want to mention that I spent a large part of the month reading Words of Radiance by Brandon Sanderson. However, as that book is so long a.k.a I didn’t finish it this month, it won’t appear in this wrap up. It will for sure be in my February wrap up though.

Synopsis: Zachary Ezra Rawlins is a graduate student in Vermont when he discovers a mysterious book hidden in the stacks. As he turns the pages, entranced by tales of lovelorn prisoners, key collectors, and nameless acolytes, he reads something strange: a story from his own childhood. Bewildered by this inexplicable book and desperate to make sense of how his own life came to be recorded, Zachary uncovers a series of clues — a bee, a key, and a sword — that lead him to a masquerade party in New York, to a secret club, and through a doorway to an ancient library, hidden far below the surface of the earth.

What Zachary finds in this curious place is more than just a buried home for books and their guardians — it is a place of lost cities and seas, lovers who pass notes under doors and across time, and of stories whispered by the dead. Zachary learns of those who have sacrificed much to protect this realm, relinquishing their sight and their tongues to preserve this archive, and also those who are intent on its destruction.

Together with Mirabel, a fierce, pink-haired protector of the place, and Dorian, a handsome, barefoot man with shifting alliances, Zachary travels the twisting tunnels, darkened stairwells, crowded ballrooms, and sweetly-soaked shores of this magical world, discovering his purpose–in both the mysterious book and in his own life.

Holy shit…this book is magical in a way I never thought a book could be. It quite literally takes you down the rabbit hole to a world of beautifully woven stories and doors that lead to new adventures. The sheer imagination and creative storytelling in this book leaves me wanting to give a standing round of applause to Erin Morgenstern.

I really like the main character, Zachary. It’s very much emphasized that he is a reader but also a gamer. I feel that’s pretty rare in books to have a main character who is interested in both but with Zachary it seemed so natural. However, the reading aspect is definitely the main focus. There were so many sentences that I felt were written directly to those of us who are addicted to books. And they hit home. I think I was smiling half the time while reading this book because it was all so relatable. Also, quite unique ones that weren’t your typical “Oh, you can never have too many books”-kind of comments.

I truly loved reading this book and I was so sad when it was over. It’s a book for you if you love books about books and don’t mind that it gets a little abstract sometimes. Not everything makes sense and not everything will be explained to you, but if you don’t mind that I think this is a must read. I will definitely be rereading it soon.

But this Halloween is different—Josiah and Deja are finally seniors, and this is their last season at the pumpkin patch. Their last shift together. Their last good-bye.

Josiah’s ready to spend the whole night feeling melancholy about it. Deja isn’t ready to let him. She’s got a plan: What if—instead of moping and the usual slinging lima beans down at the Succotash Hut—they went out with a bang? They could see all the sights! Taste all the snacks! And Josiah could finally talk to that cute girl he’s been mooning over for three years . . .

What if their last shift was an adventure?

This was so sweet and fun. I loved the friendship banter between Josiah and Deja. It really made their connection feel real right from the start. Almost from their first interaction, I had no doubt about them being best friends. It was such a joy to read about.

I gave this 4 stars but don’t take that too much to heart. I considered not rating it because this is my first ever graphic novel and I’m not sure how to rate those. I don’t really have anything to compare it to but I know that I loved reading it. I now understand why people read these during readthons. I got through that so damn fast. Probably not my last graphic novel.

My rating: No rating

Synopsis: Introducing an instant classic—master storyteller Neil Gaiman presents a dazzling version of the great Norse myths.Neil Gaiman has long been inspired by ancient mythology in creating the fantastical realms of his fiction. Now he turns his attention back to the source, presenting a bravura rendition of the great northern tales. In Norse Mythology, Gaiman fashions primeval stories into a novelistic arc that begins with the genesis of the legendary nine worlds; delves into the exploits of the deities, dwarves, and giants; and culminates in Ragnarok, the twilight of the gods and the rebirth of a new time and people. Gaiman stays true to the myths while vividly reincarnating Odin, the highest of the high, wise, daring, and cunning; Thor, Odin’s son, incredibly strong yet not the wisest of gods; and Loki, the son of giants, a trickster and unsurpassable manipulator. From Gaiman’s deft and witty prose emerges the gods with their fiercely competitive natures, their susceptibility to being duped and to dupe others, and their tendency to let passion ignite their actions, making these long-ago myths breathe pungent life again.

This book was fun and weird at the same time which, I guess, is sort of a trademark for Neil Gaiman. The weird part for me was reading these stories in a book by a very popular author. I’ve learned about these myths in school to an excessive extent so it’s quite surreal that someone like Gaiman loves them so much.

However, I’ve decided not to give this book a rating because I’m not sure what to judge. I mean, Gaiman didn’t come up with the stories. He’s just collected them. He also didn’t change anything major about them. That’s not criticism of any kind but it doesn’t feel fair to give a rating. These are simply stories from Norse mythology which I would recommend if you’re interested in those.

Synopsis: Times are hard in the mountain city of Fellsmarch. Reformed thief Han Alister will do almost anything to eke out a living for his family. The only thing of value he has is something he can’t sell—the thick silver cuffs he’s worn since birth. They’re clearly magicked—as he grows, they grow, and he’s never been able to get them off.

One day, Han and his clan friend, Dancer, confront three young wizards setting fire to the sacred mountain of Hanalea. Han takes an amulet from Micah Bayar, son of the High Wizard, to keep him from using it against them. Soon Han learns that the amulet has an evil history—it once belonged to the Demon King, the wizard who nearly destroyed the world a millennium ago. With a magical piece that powerful at stake, Han knows that the Bayars will stop at nothing to get it back.

Meanwhile, Raisa ana’Marianna, princess heir of the Fells, has her own battles to fight. She’s just returned to court after three years of freedom in the mountains—riding, hunting, and working the famous clan markets. Raisa wants to be more than an ornament in a glittering cage. She aspires to be like Hanalea—the legendary warrior queen who killed the Demon King and saved the world. But her mother has other plans for her…

The Seven Realms tremble when the lives of Hans and Raisa collide, fanning the flames of the smoldering war between clans and wizards.

I don’t want to say much about this as I have a review and spoiler talk up for it. It’s a book I really enjoyed although my rating is only 3 stars. My enjoyment was more of the “I see a lot of potential here” kind. So that means I have great hopes for the rest of the series although this one had some flaws.

Synopsis: One starry night, Peter Pan and Tinker Bell lead the three Darling children over the rooftops of London and away to Neverland – the island where lost boys play, mermaids splash and fairies make mischief. But a villainous-looking gang of pirates lurk in the docks, led by the terrifying Captain James Hook. Magic and excitement are in the air, but if Captain Hook has his way, before long, someone will be walking the plank and swimming with the crocodiles…

I don’t have much to say about this. It wasn’t a spectacular thing for me but I’m still glad I read it. At least because it’ll be more fun for me to read all the retellings now. Please recommend me some if you know any because I’m REALLY interested in those.

The book itself is something I’ll only recommend if you’re really into Peter Pan. Then you’ll probably love it. If you’re only semi-interested, it recommend just watching the movie (from 2003) because it’s better than the book, and it added some more interesting aspects to the story.

That was it for my reading in January. If it wasn’t clear… that favorite book I was talkning about in the beginning was The Starless Sea and I’m not going to stop talking about it for the rest of the year.

I hope your month was great too. Let me know your favorite of the month in the comments.

5 thoughts on “January Reading Wrap Up”